The Black Eyed Peas is an American hip hop and alternative rap/hip hop group from Los Angeles, California, who have enjoyed international pop success. The group is currently composed of will.i.am, apl.de.ap, Taboo, and Fergie. 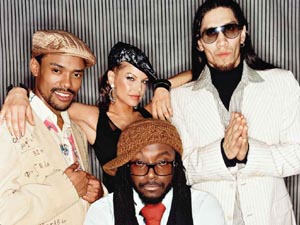 The Black Eyed Peas dates back to 1988, when eighth-graders Will Adams (will.i.am) and Allen Pineda {apl.de.ap) met and began rapping and performing together around Los Angeles. The pair signed to Ruthless Records (run by Eazy-E) in 1992 catching the attention of Eazy-E manager, Jerry Heller's nephew. Along with another friend of theirs, Dante Santiago, they called their trio Atban Klann (ATBAN: A Tribe Beyond A Nation). Their debut album, Grass Roots was never released because Ruthless did not consider the positive themes reflected in the group's music to be marketable to their audience.

After Eazy-E died of AIDS in 1995, Atban Klann reformed as the Black Eyed Peas, replacing their original third member with Jaime Gomez (Taboo), and having Kim Hill as a steady background singer. Unlike many hip-hop acts, they chose to perform with a live band and adopted a musical and clothing style that differed wildly from the "Gangsta Rap" sounds of other Los Angeles-based hip-hop acts at the time. Through the mid-'90s, they performed in the local club circuit alongside fellow acts as Ozomatli and Jurassic 5. After being signed to Interscope Records and releasing their debut, Behind the Front (1998) the group (and their accompanying live band) earned critical acclaim. The hit single from the album was "Joints & Jam", and featured on the Bulworth soundtrack. Their second album was 2000's Bridging the Gap (2000), which had the hit "Request + Line" featuring Macy Gray.

Their breakthrough album, Elephunk, was released in 2003, featuring a new female vocalist, Stacy "Fergie" Ferguson, previously a cast member of Kids Incorporated and a member of teen pop band Wild Orchid. She is the replacement of background singer Kim Hill, who departed the band during 2000. As well as the change in line-up, there was also a subtle change in name — since Elephunk the band have styled themselves as "The Black Eyed Peas".

From Elephunk came the anti-war anthem "Where is the Love?", which became their first major hit, peaking at #8 on the US Hot 100, but topping the charts practically everywhere else, including six weeks at #1 in the United Kingdom where it became the biggest-selling single of 2003. The album subsequently spawned "Shut Up", which peaked at UK #2 (despite being referred to by one reviewer as "the single most vacuous, pointless, vile and generally loathsome song in a generation") and topped the charts in many other European countries including France and Germany. Elephunk won worldwide success and went Gold and (sometimes multi-) platinum in the U.S., U.K., Germany and other European markets. The third single from the album, "Hey Mama" hit the Top 10 in the U.K., Germany and other European countries and reached the #23 in the U.S.

During The Black Eyed Peas' concert tour in Asia in 2004, Apl.de.ap's life story was featured in a weekly Filipino TV drama special called Maalaala Mo Kaya (Will You Remember), which explained his childhood with his poor family in Pampanga, Philippines, back then when he was teased "baluga" (a derogatory word for Negro), before sadly parting with them to live a better life in the US at the age of 14. "The Apl Song", with the chorus written in Tagalog (Filipino), from their album Elephunk, tells the story of Apl.de.ap. The Tagalog lyrics and backing melody were based on the song "Balita", an original composition of the 1970s Filipino folk rock group Asin. The group produced an exclusive video of the song whose distribution coincided with their tour of the Philippines as part of their album promotion.

The Black Eyed Peas' song "Let's Get Retarded" was restyled as "Let's Get It Started" for an NBA Finals worldwide commercial. New, less offensive, lyrics gave the tune a basketball theme, as opposed to the original's theme dealing with getting heavily intoxicated and partying, and the spot featured Carlos Santana. The revised song had great success as a single, particularly on the iTunes music download service. The song earned the group a 2005 Grammy for Best Rap Performance By A Duo Or Group. The Black Eyed Peas are also featured in The Urbz: Sims in the City videogame as characters. They re-recorded "Let's Get it Started" and "Shut Up" as well as other songs in "simlish" for the game also.

Their next album, Monkey Business, was released on June 7, 2005. The album's first single, "Don't Phunk with My Heart", was a hit in the U.S., reaching number three on the Billboard Hot 100. The song reached the highest peak yet of their career and earned them another Grammy for Best Rap Performance By A Duo Or Group. The song also reached three in the U.K., and five in Canada, and number one in Australia. (Some radio stations, skittish about complaints of obscenity, play an alternative version, "Don't Mess with My Heart".)

"My Humps", another song from the album, immediately achieved commercial success in the U.S. and fairly substantial radio play despite the sexually suggestive lyrics; also reaching number three on the Billboard Hot 100. However, many mocked the song for its perceived poor lyrical content, and the popular satirical Website Something Awful gave the song the award of "Stupidest Song of the Year", stating that "the Black Eyed Peas have crafted what is without a doubt the dumbest, most obnoxious song ever to disgrace the airwaves." The album Monkey Business itself debuted at number two on the Billboard 200 Albums Chart, selling over 295,000 copies in its first week and was later certified triple platinum by the RIAA.

In September 2005, The Black Eyed Peas released an iTunes Essentials playlist of their greatest hits, as well as some that were re-recorded especially for purchase through iTunes. The playlist includes popular songs such as "Don't Lie", "Shut Up", and a new version of "Where Is the Love?". It also has small stories containing info and commentary about the songs and how the group first met.

On November 27, 2005, The Black Eyed Peas performed the half-time show at the Canadian Football League's 93rd Grey Cup in Vancouver, British Columbia. The group performed the suggestive song "My Humps".

On December 10, 2005, a Peas cover of the John Lennon classic "Power to the People" was released by Amnesty International as part of the Make Some Noise campaign to celebrate human rights. The same day, The Black Eyes Peas performed their version live on the UK television programme The Record of the Year together with John Legend and Mary J. Blige.

The band is also going to make the FIFA World Cup 2006 song, along with British musician Brian Eno.

The Black Eyed Peas established the Pea Pod Foundation to help suffering children around the world. The foundation is administered through the Entertainment Industry Foundation. On February 6, 2006, at a concert in Los Angeles, California to benefit the foundation, the band was joined by Sergio Mendes, Jessica Simpson, and other stars.

On March 21, 2006, The Black Eyed Peas released a remix album, entitled "Renegotiations: the Remixes" to iTunes. It features remixed versions of Ba Bump, My Style, Feel It, Disco Club, They Don't want Music, Audio Delite, and the standard version and video of Like That.

On March 28, 2006, "Renegotiations: the Remixes" was released in Compact Disc format, minus the music video.

A Free Sunday concert in May in South Africa with The Black Eyed Peas launched the Peapod Foundation, a Charitable Service Fund of the Entertainment Industry Foundation, a leading philanthropic arm of Hollywood. The Peapod Foundation supports innovative programs for children and focuses attention on universal needs including music/artistic education, shelter/housing and health care.

Retrieved from "https://bep.fandom.com/wiki/The_Black_Eyed_Peas?oldid=3146"
Community content is available under CC-BY-SA unless otherwise noted.